Looking to the sun to create hydrogen fuel 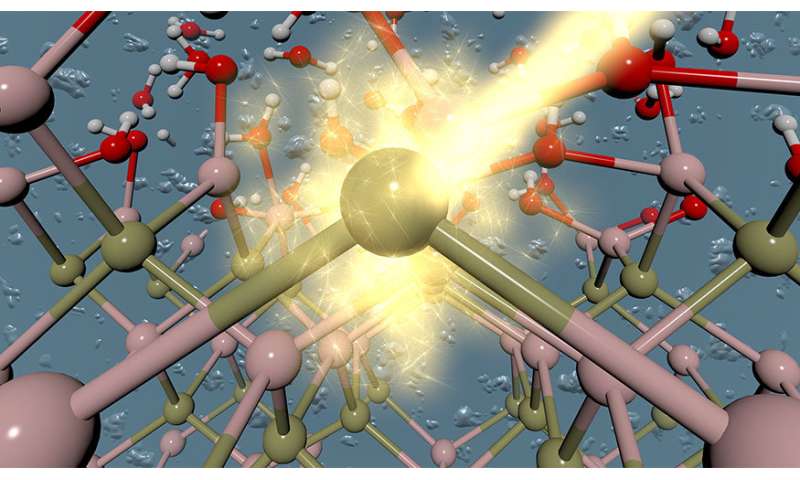 An artistic rendering of the interface between a photoabsorbing material and an aqueous electrolyte. Credit: Lawrence Livermore National Laboratory

When Lawrence Livermore scientist Tadashi Ogitsu leased a hydrogen fuel-cell car in 2017, he knew that his daily commute would change forever. There are no greenhouse gases that come out of the tailpipe, just a bit of water vapor.

The market for hydrogen cars is growing. According to a recent report by the California Energy Commission and the California Air Resources Board, the state is now home to 31 hydrogen fuel stations.
The next challenge is making hydrogen fuel cost-effective and sustainable.
"Hydrogen can be produced from multiple sources, but the holy grail is to make it from water and sunlight," said Ogitsu, a staff scientist in the Quantum Simulations Group at Lawrence Livermore National Laboratory (LLNL). He also is a steering committee member for the HydroGEN Advanced Water Splitting Materials Consortium, a Lab-led consortium in the Department of Energy's (DOE) Energy Materials Network. It is focused on hydrogen production from water via advanced high and low temperature electrolysis, as well as photoelectrochemical and solar thermochemical processes and is managed through the Fuel Cell Technologies Office of DOE's Office of Energy Efficiency and Renewable Energy (EERE).
One of the challenges associated with solar-driven water-splitting technologies for hydrogen production is the stability of the device that performs the task. In photoelectrochemical (PEC) hydrogen production, a sunlight-gathering semiconductor photoabsorber is immersed directly into a water-based electrolyte solution. A challenge is that many of the most efficient photoabsorbing materials, such as silicon and indium phosphide, are often unstable under PEC operating conditions. This is largely due to chemical reactions at the solid/liquid interface, some of which result in material oxidation and degradation.
Together with colleagues at Notre Dame University and Lawrence Berkeley National Laboratory, LLNL scientists have developed an integrated theory-experiment technique to interrogate chemistry at solid/liquid interfaces. This technique was applied to understand oxides formed on gallium phosphide (GaP) and indium phosphide (InP) surfaces under conditions relevant to PEC hydrogen production, a first step toward controlling the chemistry of these materials. The research appears on the cover of the Journal of Physical Chemistry Letters in the Jan. 4 edition.
Ogitsu, Brandon Wood and lead author Tuan Anh Pham leveraged the high-performance computing capabilities at LLNL to simulate possible chemical species that can occur on photoabsorber surfaces in contact with aqueous media. These species were then characterized by spectroscopic fingerprints using quantum-mechanical calculations.
Researchers from Notre Dame experimentally validated the calculations using state-of-the-art X-ray photoelectron spectroscopy. Beyond providing a detailed understanding of chemistry at the solid/liquid interface, the authors explored how it affects the semiconductor stability during operation. For example, they discovered that, when compared to GaP, the hydrogen network near InP surfaces is much more fluid, facilitating self-healing of surface imperfections that result in improved corrosion resistance of the InP.
"The rapid developments in computational and experimental methods now make it possible to directly integrate the two in a manner that we haven't seen before," Pham said. "This provides a new way to understand the chemistry of very complex interfaces that otherwise couldn't be tackled by any single technique. Our work is a roadmap for probing these types of interfaces in a wide variety of energy technologies."
Source:PHYS