III-V laser integration on Si is seen as a promising path to overcoming the current interconnect bottleneck in computing. Therefore, III-V lasers need to be integrated with a CMOS-compatible process flow. Furthermore, parasitic elements of the lasers must be minimized while preventing trade-offs to the lasing action (i.e. doping level in the 1018 cm−3). One such parasitic element is the n-type ohmic contact on moderately doped n-InP. A detailed study of CMOS-compatible contacts on n-InP including structural analysis has not yet been performed. To fill this gap, we will comprehensively report on various metal contacts on n-InP that reach a record-low median specific contact resistivity of 6  ×  10−8

Carrier lifetime maps and distributions of doped n-InGaAs in a MBE-grown p-InP/n-InGaAs/n-InP double heterostructure (DH) were measured at 300 K and 85 K using the μ-PCD lifetime screening technique. The theoretical considerations required in this technique are discussed in detail. The average carrier lifetimes are 168.2 ns and 149.4 ns at 300 K and 85 K, respectively. The results are consistent with those of ZnS/n-InGaAs/n-InP DHs. InGaAs lifetime mapping of the InP/InGaAs/InP DH is easily obtained without destruction by μ-PCD carrier lifetime measurement. Therefore, it could be a potential method to characterize the uniformity of the wafers, which is necessary to fabricate InGaAs focal plane arrays (FPAs).

An electrochemical etching based on HCl solution was developed for use in the chemical lift-off of InP membranes. Under the same etching conditions, the diameter of InP pores increases with the increase of etching depth or etching voltage. When the etching depth or etching voltage is over a critical value, the InP layercan be electropolished, leading to the lift-offof nanoporous InP membranes. The lift-off membranes can be transferred onto a substrate. Compared to the planar InP wafer, the etched InP wafer and transferred InP membrane present stronger photoluminescence emission and weaker reflectance in the range of 250-850 nm. 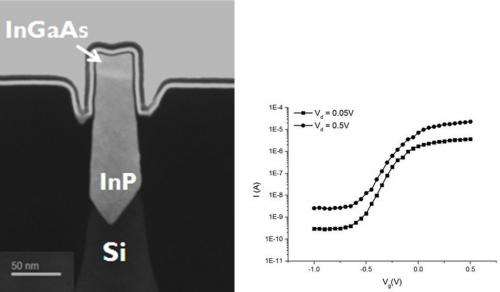 "To our knowledge, this is the world's first functioning CMOS compatible III-V FinFET device processed on 300mm wafers," stated An Steegen, senior vice president core CMOS at Imec. "This is an exciting accomplishment, demonstrating the technology as a viable next-generation alternative for the current state-of-the-art Si-based FinFET technology in high volume production."
The proliferation of smart mobile devices and the ever growing user expectations for bandwidth and connectivity, will drive the continual need for software and hardware advancements that extend from networks to data servers and mobile gadgets. At the core of the hardware will be new process technologies that allow for more power-efficient CMOS transistors and increased integration, enabling a higher level of functionality. This prompts process technologies that enable heterogeneous devices spanning operating ranges for targeted circuits, maximizing the system performance.
Aaron Thean, director of the logic R&D at Imec commented: "During the last decade, transistor scaling has been marked by several leaps in process technologies to provide performance and power improvements. The replacement of poly-silicon gate by high-k metal-gate in 45nm CMOS technology in 2007 represented a major inflection in new material integration for the transistor. The ability to combine scaled non-silicon and silicon devices might be the next dramatic transistor face-lift, breaking almost 50 years of all-silicon reign over digital CMOS. This work represents an important enabling step towards this new paradigm."
At the finest grain, co-integration of high-density heterogeneous transistors has been challenged by the ability to combine disparate materials and structures while maintaining low enough complexity and defectivity. Imec's breakthrough process selectively replaces silicon fins with indium gallium arsenide (InGaAs) and indium phospide (InP), accommodating close to eight percent of atomic lattice mismatch. The new technique is based on aspect-ratio trapping of crystal defects, trench structure, and epitaxial process innovations. The resulting III-V integrated on silicon FinFET device shows an excellent performance.
Imec's research into next-generation FinFETs is performed as part of imec's core CMOS program, in cooperation with imec's key partners including Intel, Samsung, TSMC, Globalfoundries, Micron, SK Hynix, Toshiba, Panasonic, Sony, Qualcomm, Altera, Fujitsu, nVidia, and Xilinx.